Shaoni Bhattacharya and Will Knight

An electrical current could one day control high blood pressure in people, a new study suggests.

researchers have shown for the first time that stimulating a certain part of the brain with implanted electrodes can influence arterial blood pressure in a predictable way in patients.

Short bursts of electrical stimulation were applied in an area in the midbrain called the periaqueductal grey matter (PAG) in 15 awake patients. The patients had already had the deep brain electrodes fitted as a treatment for chronic pain. 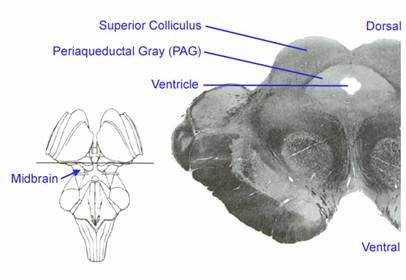 “It’s very early days yet, but this is an exciting preliminary finding,” says Alexander Green, at the department of neurosurgery, , who believes the technique has great potential.

But he cautions that the surgery to place the electrodes in the brain carries a one in 300 risk of stroke. For patients receiving the implants to treat severe conditions such as Parkinson’s disease, the risk may be acceptable. But that is currently far from the case for patients with blood pressure problems.

Previous experiments, dating back to the 1930s, have exerted a degree of mind-control over animals by electrically stimulating the PAG. Blood pressure changes and "freezing" responses have been produced in cats, and stimulating the PAG of rats elicits a “defense” response. Green speculates that the PAG may be involved in control of the cardiovascular system and the "fight-or-flight" survival responses – of which changes in blood pressure could be one part.

The team stimulated the patients’ brains for periods of about 5 minutes at a frequency of 10 Hertz, followed by a 3-minute recovery period. The electrode was about 1.2 millimeters in diameter with four “contact points” at its end. These points are 1 mm apart and a current flows between them when switched on, Green explained to New Scientist.

Two of the patients who responded showed both increases and decreases in blood pressure at different times, while the remaining four people did not respond at all.

As well as potentially treating hypertension (high blood pressure), Green says the technique might one day be used to relieve a condition called postural hypotension – where a patient’s blood pressure falls uncontrollably upon standing up.