A remote control that controls humans

ATSUGI, - We wield remote controls to turn things on and off, make them advance, make them halt. Ground-bound pilots use remotes to fly drone airplanes, soldiers to maneuver battlefield robots. But manipulating humans? Prepare to be remotely controlled. I was.

A special headset was placed on my cranium by my hosts during a recent demonstration at an NTT research center. It sent a very low voltage electric current from the back of my ears through my head _ either from left to right or right to left, depending on which way the joystick on a remote-control was moved. I found the experience unnerving and exhausting: I sought to step straight ahead but kept careening from side to side. Those alternating currents literally threw me off.

The technology is called galvanic vestibular stimulation — essentially, electricity messes with the delicate nerves inside the ear that help maintain balance. I felt a mysterious, irresistible urge to start walking to the right whenever the researcher turned the switch to the right. I was convinced — mistakenly — that this was the only way to maintain my balance.

The phenomenon is painless but dramatic. Your feet start to move before you know it. I could even remote-control myself by taking the switch into my own hands. There's no proven-beyond-a-doubt explanation yet as to why people start veering when electricity hits their ear. But NTT researchers say they were able to make a person walk along a route in the shape of a giant pretzel using this technique.

It's a mesmerizing sensation similar to being drunk or melting into sleep under the influence of anesthesia. But it's more definitive, as though an invisible hand were reaching inside your brain.

NTT says the feature may be used in video games and amusement park rides, although there are no plans so far for a commercial product. Some people really enjoy the experience, researchers said while acknowledging that others feel uncomfortable.

I watched a simple racing-car game demonstration on a large screen while wearing a device programmed to synchronize the curves with galvanic vestibular stimulation. It accentuated the swaying as an imaginary racing car zipped through a virtual course, making me wobbly.

A remote control that controls humans

Another program had the electric current timed to music. My head was pulsating against my will, getting jerked around on my neck. I became so dizzy I could barely stand. I had to turn it off. NTT researchers suggested this may be a reflection of my lack of musical abilities. People in tune with freely expressing themselves love the sensation, they said.

"We call this a virtual dance experience although some people have mentioned it's more like a virtual drug experience," said Taro Maeda, senior research scientist at NTT. "I'm really hopeful Apple Computer will be interested in this technology to offer it in their iPod." Research on using electricity to affect human balance has been going on around the world for some time.

James Collins, professor of biomedical engineering at , has studied using the technology to prevent the elderly from falling and to help people with an impaired sense of balance. But he also believes the effect is suited for games and other entertainment.

"I suspect they'll probably get a kick out of the illusions that can be created to give them a more total immersion experience as part of virtual reality," Collins said. The very low level of electricity required for the effect is unlikely to cause any health damage, Collins said. Still, NTT required me to sign a consent form, saying I was trying the device at my own risk. 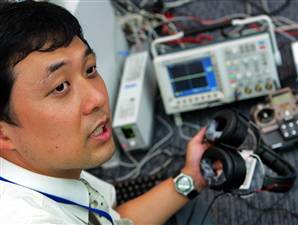 Taro Maeda, senior research scientist at NTT, holds the headset through which electricity is sent. It stimulates the delicate nerves inside the ears that help humans maintain balance and causes people to sway against their will.

And risk definitely comes to mind when playing around with this technology. Timothy Hullar, assistant professor at the Washington University School of Medicine in St. Louis, Mo., believes finding the right way to deliver an electromagnetic field to the ear at a distance could turn the technology into a weapon for situations where "killing isn't the best solution." "This would be the most logical situation for a nonlethal weapon that presumably would make your opponent dizzy," he said via e-mail. "If you find just the right frequency, energy, duration of application, you would hope to find something that doesn't permanently injure someone but would allow you to make someone temporarily off-balance." Indeed, a small defense contractor in Texas, Invocon Inc., is exploring whether precisely tuned electromagnetic pulses could be safely fired into people's ears to temporarily subdue them.

NTT has friendlier uses in mind.

If the sensation of movement can be captured for playback, then people can better understand what a ballet dancer or an Olympian gymnast is doing, and that could come handy in teaching such skills. And it may also help people dodge oncoming cars or direct a rescue worker in a dark tunnel, NTT researchers say. They maintain that the point is not to control people against their will. If you're determined to fight the suggestive orders from the electric currents by clinging to a fence or just lying on your back, you simply won't move. But from my experience, if the currents persist, you'd probably be persuaded to follow their orders. And I didn't like that sensation at all.