AND THEIR EFFECT ON THE NERVOUS SYSTEM

Originally these interferences were only a concern when disturbing the normal operation of other machineries like radios and medical devices. 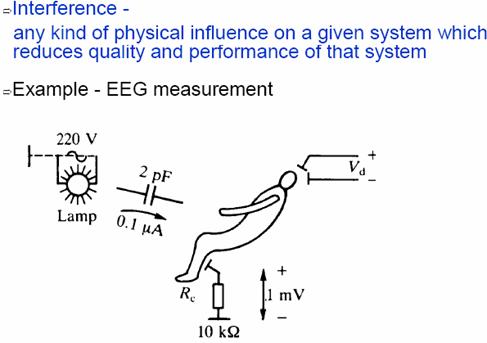 In the recent 15 years, however, there has been growing awareness that electromagnetic interferences were affecting the human body. Most notable was the concern that cellphone usage and high power lines caused cancers and diseases.

In what way do electromagnetic interferences affect the nervous system?

The frequency of the electromagnetic interference is a very important parameter that determines its interaction with the human body. Cellphone radiations are at higher frequencies then powerline radiation, over a million times higher. High frequencies tend to penetrate less and heat human tissue, just like microwave oven frequencies that heat the upper layers of foods and leave the lower layer colder. It has been speculated that high frequency electromagnetic energies might interfere and resonate with DNA and other cellular apparatus which might trigger cancerous changes.  The US government tested high power microwave weapons that had the ability to disrupt animal and human behavior; which was attributed to heating of the brain by microwaves.

Below 100 KHz the main effect of electromagnetic interferences is the production of electric currents within the body. Power transmission and domestic electricity work in this range (50 to 60 Hz).

There is growing concern that powerline interferences with the human body are not benign. Major emphases have been on exposure from high voltage powerlines, but even exposure from household powerlines and appliances are under scrutiny. There has been greater understanding that the human body responds to low frequency electromagnetic (ELF) energies more readily then at high frequencies even at extremely low power.

The explanation for the human body’s sensitivity to ELF interferences lies in the nature of the earth itself.  Extremely-low-frequency (ELF) electromagnetic waves are naturally abundant due to low-frequency Schumann radiation from the upper atmosphere. 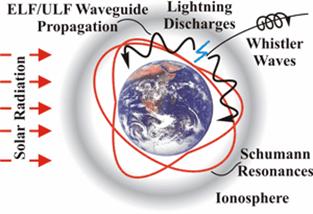 The low-frequency Schumann radiation superimposed on the Earth's permanent magnetic field represents the natural electromagnetic background to which life adapted and evolved.

The low-frequency Schumann radiation from the upper atmosphere appears to be of particular importance in relation to biological rhythms and has a frequency spectrum which resembles that of the human (EEG) brain-waves. In electrotherapy, the frequencies 27.5 Hz, 55 Hz, 110 Hz, 220 Hz, 440 Hz and 880 Hz are said to be extremely effective. In interferential electric stimulation therapy, frequencies 0.1-5 Hz affect the sympathetic nerves, 10-150 Hz affect the parasympathetic nerves, 10-15 Hz affect the motor nerves, 90-110 Hz affect the sensory nerves, 130Hz affects the nociceptive system and 0.1-10Hz affects muscle. The EEG frequency of 5 Hz is usually regarded as being depressive, while the range 8 – 10 Hz associated with well-being and general alertness. 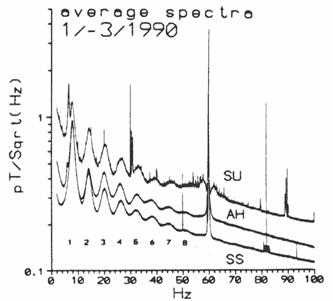 The chart above demonstrates 60Hz powerline interference on the natural global electromagnetic background. The Schumann frequencies bumps are seen at  7.5, 14.5, 20, 27 Hz and so on

A study of suicide rates in 138,905 male electric utility workers, published in the Western Journal of Medicine, showed a correlation between estimated exposure to extremely low-frequency electromagnetic interferences and a significant increase in the risk of suicide. Even stronger associations, up to a 3.5-fold increase, were found in men younger than 50. A separate report by Pacific NW Laboratory postulates that exposure to ELF is a potential contributing factor in depression. ELF fields may interfere with hormonal secretions which may exacerbate existing depression, or contribute to an onset of depression.

Martin Halper, the EPA's Director of Analysis and Support says "I have never seen a set of epidemiological studies that remotely approached the weight of evidence that we're seeing with EMFs.."

In another study, Dr. Wolpaw examined the brain functions of monkeys exposed to 60 Hz magnetic fields. He measured the levels of neurohormones in the spinal fluid of monkeys thus exposed for three weeks. It was found that the levels of serotonin and dopamine were significantly depressed immediately following exposure, and that only the dopamine returned to normal levels several months after. Changes in serotonin levels are known to be associated with depression. For example, lowered levels of this chemical in the brain have been linked to an increase in suicide frequency.

Baboon exposed to 60 Hz powerlines expressed different behaviors according to Dr. Easley. The 60-Hz electric field had significant effects on the social behavior of baboons because it triggered a stress response.

To underline that weak low frequency electric currents affect the brain, transcranial direct current stimulation is under investigation to treat mental diseases. Wikipidia states that “Transcranial direct current stimulation (tDCS) is the application of very weak electrical currents (1-2 mA or thousandths of an amp) to modulate the activity of neurons in the brain.”  We are readily exposed to 1 mA of ELF electric current at home.  To verify this claim, hold an ac ammeter probe in hand and touch a grounded metal object like the water faucet.

Inside a typical house low frequency electric field is usually of 100 times higher than the one outside. Outside households, earth, buildings, trees and other materials interposed with the electromagnetic sources attenuate and shield from the electric field, but not the magnetic field. Even the buried of power lines radiate magnetic fields.

Some home appliances are notorious radiator of ELF. Hair dryers, computer monitors, electric stoves, blankets, shavers, clocks and fluorescent lights are the strongest radiator.  It is difficult to escape exposure to man made electromagnetic interferences. 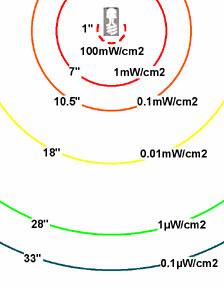 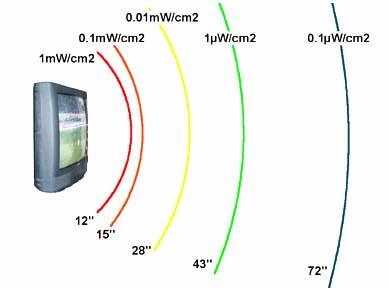 There are several method to reduce exposure to electromagnetic interference. The most frequent method is shielding and the use of ground wire. Some building codes require installing powerline inside steel pipes.

Electronic Manufacturers have moved toward reducing EMI from their equipment. 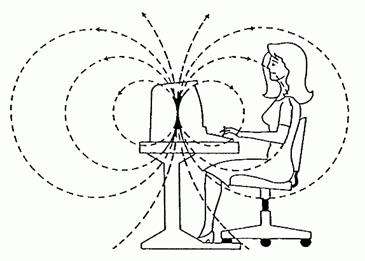 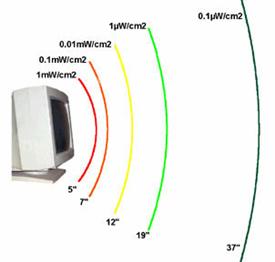 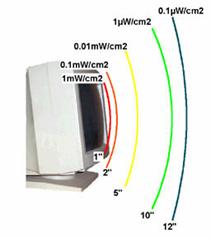 Above figures show common computer CRT radiate EMI. On the right the two pictures show the difference in the EMI profile of old generation CRTs versus new generation CRTs. 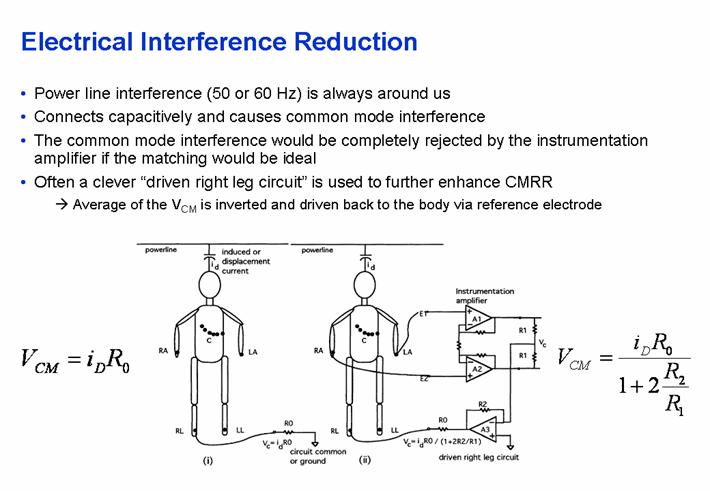 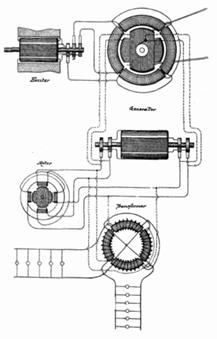 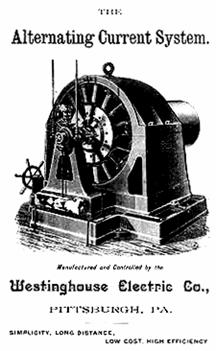 Electromagnetic interferences on the nervous system should get more attention and research. Just like smoking was considered safe and even healthy in earlier days, EMI still is not taken seriously and many are in denial about its effects. Aside from ELF discussed earlier, EMI is not a natural occurrence. Never in the history of earth has there been so much electromagnetic energy in the environment. This energy is bound to do some work and have an effect. For 4 Billion years, life on earth has been in an EMI free environment, shielded by the earth magnetic field.  Many scientists believe that life faced great challenges and mutated when the magnetic field naturally weakened during the normal flipping of the poles over the millions of years. So EMI protection is essential for the Biosphere. It is the author’s opinion that EMI plays a great role in the mental health of populations and might be affecting history. Just like many historians correlate the fall of Rome with the Romans increased use of lead in water pipes and for cooking utensil, historian in the future will correlate world events with the rise of EMI.